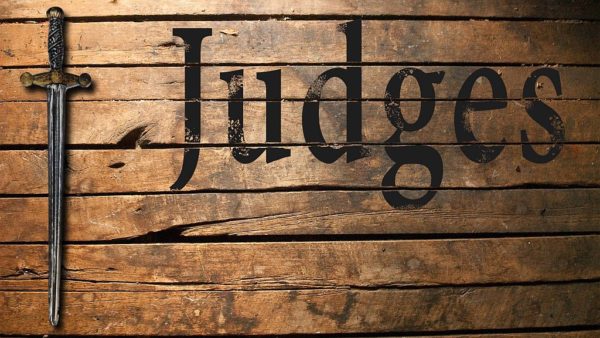 I’ve never given much thought to the book of Judges in the Bible before. It is not a book often referenced from American pulpits, at least not in my Protestant experience.

What inspired me to even read Judges recently was a dream. It was very short but went like this: I was in a public venue, in some type of leadership capacity. A petite, brown-haired woman approached to shake my hand, and she said to me, “I especially appreciated your research on Judges.” She said more, but it dissolved quickly upon returning to consciousness.

I awoke confused at first but curious. I had not done any research on Judges. Still, knowing dreams are used by the Holy Spirit, I began scanning through this mostly unfamiliar book. First, I read casually, but began really reading in earnest as I witnessed an obvious pattern unfold.

Through 450 years of ancient Israel’s ups and downs recorded in Judges’ 21 chapters, a clear formula was evident. It is very simple:

When the people of God trusted and were faithful to Him, their land was at peace and rest under good leadership. Conversely, whenever the people strayed, rebelled and turned to evil, they were punished with evil leadership.

But, each time the people cried out to the Lord for deliverance, He responded and answered their cry. In His response, He overturned evil and restored the good. Every. Single. Time.

Within this pattern, I noticed the phases of punishment were vastly shorter than the years of peace and rest. So, the grace of God was still present, even in judgment.

If you will allow, I would like to speak on a controversial subject related to American politics. I usually avoid politics like the plague. I don’t know about your country, but it seems to divide Americans faster than anything else.

As a Christ-follower and His ambassador first and foremost, I try not to offend one group or another. The sacrifice of our Savior, Jesus Christ, is for all people. His followers can be found on all sides of any political argument. Staying focused on Him and His word is usually the best approach to remain welcoming to a diverse audience, as Christ is welcoming.

But sometimes, you have to speak truth no matter the consequences. This is one of those times.

As surprising as it is even to me to hear myself say this, I believe Donald Trump is God’s choice for America right now. I believe his victory was in response to a growing cry from God’s people for our nation to return to Him.

Mr. Trump is far from perfect, he is not a polished politician who guards his words. He is not a shiny Christian whose life has been exemplary as a Christ-follower.

But there are some things in particular he has spoken into the American conscience again, and chief among them is a respect for life in the womb. This, I believe, above all else, is near and dear to the heart of God.

The Bible teaches us God is the author of life, that He knit us in the womb (Psalm 139:13). No human, even the mother, has a right to take the life into which God placed a beating heart and breathed a soul.

Tellingly, every time the people of God in Judges rebelled, they returned to Baal worship. Baal worship involved infant sacrifice.

When the people of God in Judges returned to Him, repented and cried out for deliverance, good leadership was restored and Baal worship and infant sacrifice were knocked back down. The parallels to current day America and abortion are stunning and sobering.

In addition, Mr. Trump has reignited protection upon the people of God and their right to freedom of worship and speech. Finally, he has returned us to acknowledgement of the sovereignty of Israel and commitment to our close friendship and alignment with her as our best friend in the Middle East.

Who could have imagined the billionaire business tycoon and reality TV star would so powerfully step into the role of protector of things sacred and Holy to God’s people? But, he did.

And in response, the economy has roared back to life, unemployment is down to historic levels, businesses are hiring and growing once more in America, and peace is being forged one talk at a time on the foreign stage. All of this happening while the President is attacked mercilessly by political opponents and the vast majority of the media.

Against all odds God is outpouring blessing once again upon America through a most unlikely candidate. I believe the principle spoken in II Chronicles 7:14 is being played out dramatically:

If My people, who are called by My name, will humble themselves and pray, and seek my face and turn from their wicked ways, then I will hear from heaven and forgive their sin and heal their land.

Prior to Mr. Trump’s election, a groundswell movement had grown over several years inside a broad spectrum of halls of faith, and individual followers of Christ began praying, seeking, repenting, and fasting… for a return of God’s hand of blessing upon our dear nation. We understood it required us to change, and Him to be placed back in charge.

Incredible evidence of the mighty hand of God was seen ON election day, 2016: Signs of Divine Intervention in Trump Victory

On November 8, 2016, we witnessed a stunning turn in the election results – at the precise moment thousands were praying together for God’s intervention – and a miraculous victory that day for the long shot. (Of course, unknown numbers of us had also been fasting and praying leading up to the election.)

His opponent, the favorite to win, was the one candidate in history that had most championed abortion. Her husband was the first President to make it a primary part of his agenda years before, and she would have increased her defense of it and removed all restrictions.

Just as the ancient people of Israel in Judges cried out again and again under wicked leadership to see God overturn evil and restore them in response, I am as surprised as anyone to say I believe God placed Donald Trump in the White House in response to the cries of His people for America. And, defense of the most innocent human life, by no accident and with great significance, has returned.

Followers of Christ, appreciate every minute of this time of blessing and reprieve for our nation. Do not let down your vigilance to pray for our President and leadership.

Never stop praying, regularly fasting, surrendering to His Spirit, for you are standing in the gap, upholding our land before Him. He has heard you, and He has moved His hand on your behalf!

What an amazing, faithful and great God we serve. He is holy and just, mighty and worthy. Praise Him! And may He continue outpouring His blessing upon America, that we may be a blessing to the rest of the globe!